Home | Blog | Creating A Big Impression On A Small Budget

Creating A Big Impression On A Small Budget

Stretching your budget but not reducing the quality of your event is a tough but not unattainable objective to achieve. Recently, LAI Live successfully produced an executive summit for The American Society of Travel Agents where we did just that.

The meeting was held for C-suite executives so it was crucial to keep the high-quality of a fully produced event within the budget that smaller meetings and events typically stick to. The summit took place at the Watergate Hotel and we made the most of the space and resources that were already available to us. The ballroom was within elegantly, polished marble walls which we used as the backdrop for the stage rather than building a new backdrop. Furniture found in the foyer was used to decorate the stage. The ceiling had a starlight effect which we kept covered until it was time for the fundraising dinner - creating a different aura in the same space. 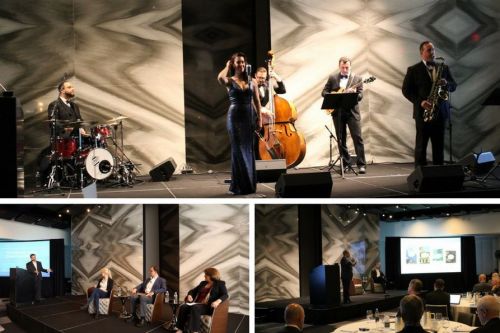 By using the assets in the setting to create a great venue, we could focus our resources on making a big impression. We worked with the ASTA team to amp up the entertainment portion, we reenacted industry court cases and their judicial outcomes. Using the People's Court music, the "ba dump" Law & Order sound effect, and many other audio and visual effects, each case was filled with relevant information to the attendees. The audience voted who they thought should win the case before the judge revealed the outcome. The event made attendees feel like they were part of an actual court case.

Make the Most of Your Budget at Your Next Event

Want to put together a great event but worried you don't have the financial backing to pull it off? We can help!

END_OF_DOCUMENT_TOKEN_TO_BE_REPLACED

What to Consider When Planning A Hybrid Event

Behind the Look: American Trucking Associations